I had a minor trampoline injury on Sunday evening, and so, I didn’t feel up to building anything. I used the time to dream about possible track plans for a display layout for RAMMA. 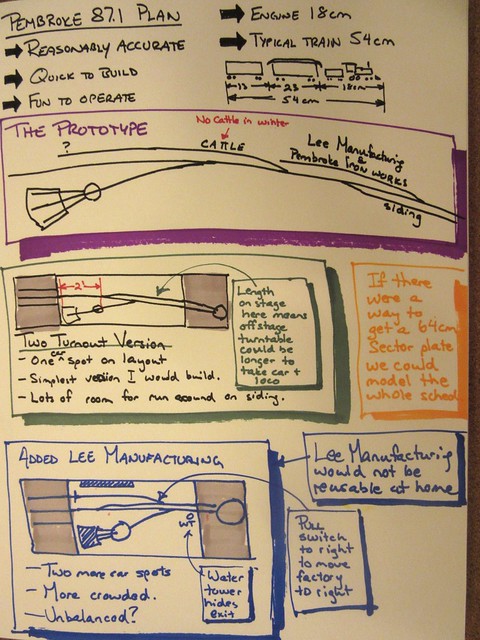 As you can see, I started with the prototype, of course. This came from a diagram that is a little later than the 1905 timeframe that I model. I believe in my day, the switch into Lee Manufacturing went the other way. That’s the way I’ve built it on the home layout, and it yields a nice switch-back for added switching fun.

In my mind, I had roughed in a version that brought the turnouts for the depot area into the scene. However, as I thought about it, more turnouts implies more cost and more time (the latter is signficant). If the staging yard is anything to go by, I’m looking at a good couple of weeks to lay the four or five turnouts that would have implied.

So, I pulled in my horns, and thought about using only two turnouts – the siding and the engine house. There is no point in including the cattle pen as I don’t think cattle would have been shipped in winter. (Hmm, as I think about this more, an un-plowed siding would make an interesting scenic detail).

If I add Lee Manufacturing back in, I get another turnout, but two more spots, which could be fun for operating. Incidentally, there is a third spot for engine coal inside the engine house. I wasn’t sure about crowding the scene with Lee Manufacturing, and so, I mocked it up in Sketchup.

So what do you think, should I divert resources away from Pembroke:87 to build Pembroke:87.1? If so, which one?