On Wednesday evening, I had an opportunity to dispatch on my friend Scott Calvert’s layout.  His is a timetable and train order operation, just as the real Boundary was.  If you’ve never had an opportunity to participate in a TT&TO operation, I encourage you to come to Vancouver for the annual Railway Modellers’ Meet.   This year, we have operating sessions on two evenings, but they’re almost booked up so you’d better act fast!  If you want to learn about TT&TO, I will be re-running my introductory clinic at the May Railway Modellers’ Meet (watch for updates).

It was a quiet night in the dispatcher’s office on Wednesday.  I issued 14 run orders and one run and meet order, and otherwise I just took OS’s.   Midway through the session, however, things got exciting out on the line.

At 14:15, I received an OS from Nelson that #807 had left.  Five fast minutes later (4:1 fast clock), South Slocan called to say that #968 had left on time.  There is no siding between them on Scott’s single track layout.

Sure enough, in the other room, there was an almighty noise — not a crash, but some good natured ribbing when Mark stopped #968 nose-to-nose with David’s #807.  They met just inside yard limits, and so, both second class trains were slow enough to stop when they saw each other.

Fortunately, everyone else was having too much fun to remember to take a photo.  So, the embarrassment will soon fade.  However, I grabbed a shot of the train sheet so you can see what a head-on collision looks like. 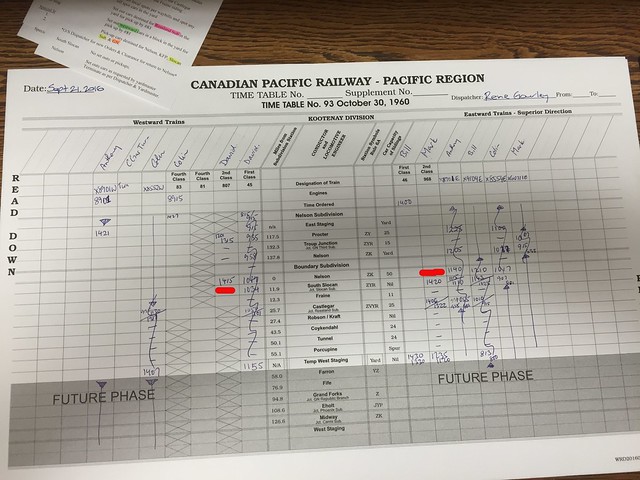