One of the benefits of modelling a prototype location is that you don’t have to make it up. Until David Estabrooks’s recent posting to Facebook, I was expecting that the land to the south of Alfred Street was bush.  However, we can clearly see that there was a field of vegetables, and from the spacing, potatoes seem like a good guess. 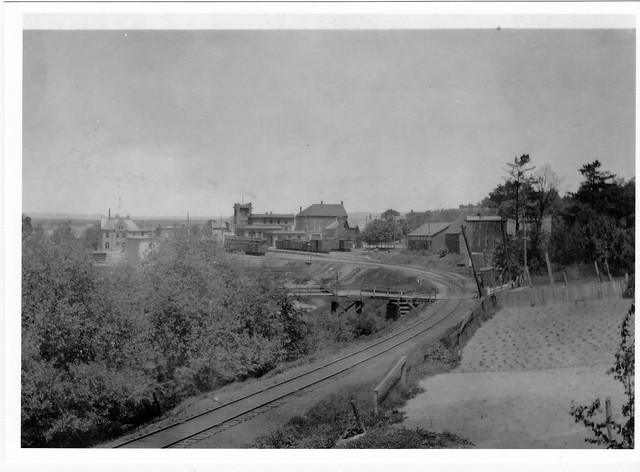 We can also see that the hill is a good deal less severe than I had stacked a couple of weeks ago.  I love that mix of fences: vertical boards along the street, posts with an L-shaped top-rail on the railway side of the field, transitioning to normal line fencing on the southern boundary and along the right of way.

I roughed in the field with foam insulation, and it makes for a pleasing scene, despite the chaos downtown. I’m trying to get the river to be smooth. So far there are two layers of primer, more wood filler, and my arm is sore from sanding.

This view makes my straightening of Pembroke obvious.  If I had kept the prototype curve, either the depot would have been off the edge of the layout, or the engine house would have been in the middle of the room.