My friend, Scott Calvert emailed some photos that he took of last month’s operating session on his Boundary Sub.  I was struck by the studied concentration on Chuck, Bill and Colin’s faces as they switch the yard at Nelson above.

I especially love this one of Brian Pate, assuming his classic pose while running the GN Interchange train through Troupe Junction.  That’s his brand new caboose gracing the tail end.  He specifically asked for this assignment so he could run this nice model.

There is hardly a smile among the lot.  This is something I notice throughout operating sessions: it doesn’t look like fun when you see someone doing it.

There is a constant debate among the serious model railroaders I know as to whether Model Railroading is indeed fun.  Fulfilling, edifying, satisfying – these are adjectives that others use to describe model railroading.  I maintain that it is fun, but looking at the expressions etched on these faces, you would never know it.

My brother in law, Mark Fisher, raced sprint cars for over twenty years (he’s threatening to come out of retirement so his grandkids can see him race). He would never hesitate to call it fun, but looking at the photo below, it’s hard to imagine that fun. 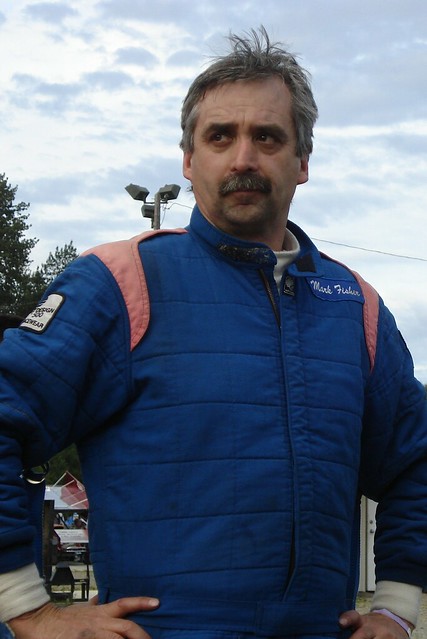 He calls it his game face.

It’s the expression he wears when he is preparing to compete. Racing sprint cars is serious business, with a lot on the line.

But racing itself was only part of the hobby for Mark. Mark probably spent 98% of his time working on the car, and 2% in the car. Much of the time, he had buddies helping him, and that, I think is when the fun happened.

It is the same with railway modelling. The time I spend alone on the layout is fulfilling and satisfying. Operating sessions are kind of the reason for doing it, and they are challenging. The fun comes when I get together with friends for a work session, or the breaks in the operating session when we all get our turn being teased about our mistakes.

Yes, there is fun in the hobby, but there’s more than that too.