Those who saw this turntable at the Vancouver Train Expo this weekend already know about the disaster that befell the pit wall when I was completing the scenery. That part of the MDF that was not sealed before was still not sealed, and the swelling was nothing short of hideous.

At the show, I talked bravely about pulling out the whole wall and replacing it with a wall built up with ties. However, the more I thought about that, the more I wondered how I would make a flat foundation for this wall of ties. What’s more, by removing the wall, I would expose more MDF, and if this behaved as the rest, then I risked swelling under the ring rail, at which point, I may as well start over. So, I decided to remove as much of the affected MDF as I could and fill it with something impervious to moisture.

I started by drilling in through the pit wall all the way to the plywood behind. I felt a lot like a dentist drilling out a cavity, feeling for the soft decaying matter and the interface with sound material. I then swapped my drill for a knife and a screwdriver. With the knife, I was able to carve almost all the punky softened MDF out, and the screwdriver helped to retrieve it from the slot. 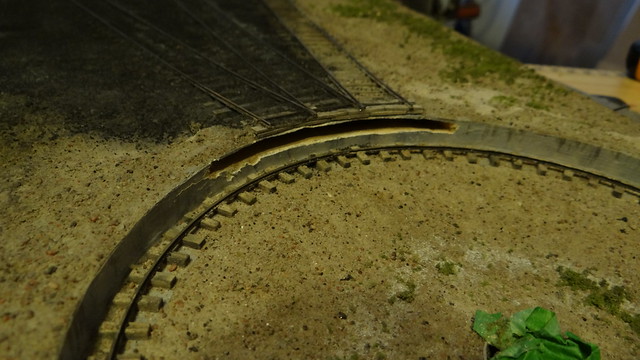 I then removed anything that would get in the way of the rails re-seating themselves from the surface. Notably, the spikes had to come out for about a half-dozen ties or so where the rails were floating in the air. 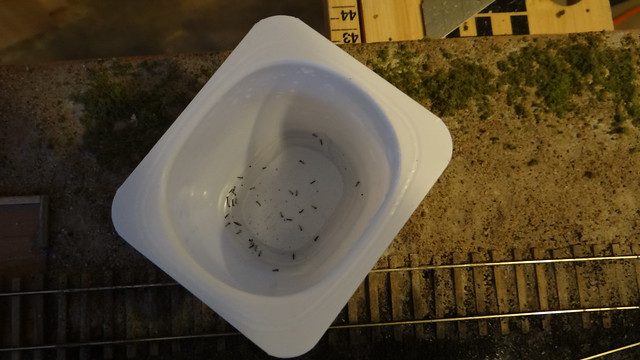 I clamped the rails down so they matched the height of my turntable. This was a delicate operation, and because of the clamping boards, I was really only able to check the two outermost rails. Hopefully all the others average out between them.

Then, I filled the hole with construction adhesive, which I applied using a small syringe and a large diameter needle – the type you’d rather never get an injection with. I pumped adhesive into the back of the cavity until it started coming out the front, and then I move the needle along a little ways. 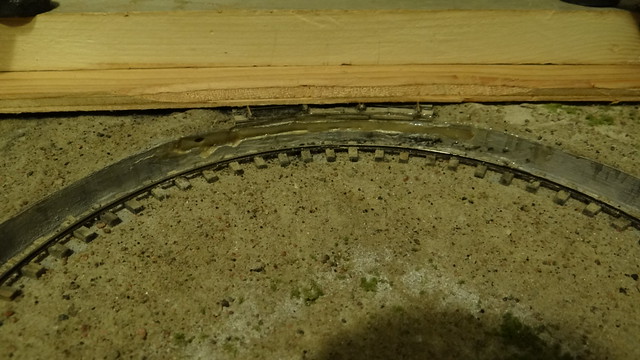 I’m hoping this means I have completely filled the cavity, but I’m going to avoid more wet scenery methods in this area anyway. I’m further hoping I won’t find a big gob of adhesive gluing my clamping boards to the rails when I go to remove them tomorrow.

That’s a whole lot of hoping! Cross your fingers!

One thought on “Dentistry on the Turntable Pit”