Vancouver Train Expo is just a few days away, and as I’m speaking about turntables on Sunday, I’d better finish this one! Last night, I put the final touches on the tracks.

I painted the PC board ties with acrylic paint. I really struggled to match the colour of the nearby ties. In the end, what worked best was a layer of raw sienna lightened almost to white, then dry-brushed over with very light raw umber. However, there are far too many layers here to call that a recipe. Hopefully when the ballast goes in, everything will blend anyway.

There are gauge bars at the end of each track. These were simply constructed of .020″ styrene rod, cut to fit from web to web of the rails. That works in Proto:87, but don’t try it in coarse-scale HO! This gauge bar was something I noticed on the Wakefield turntable. 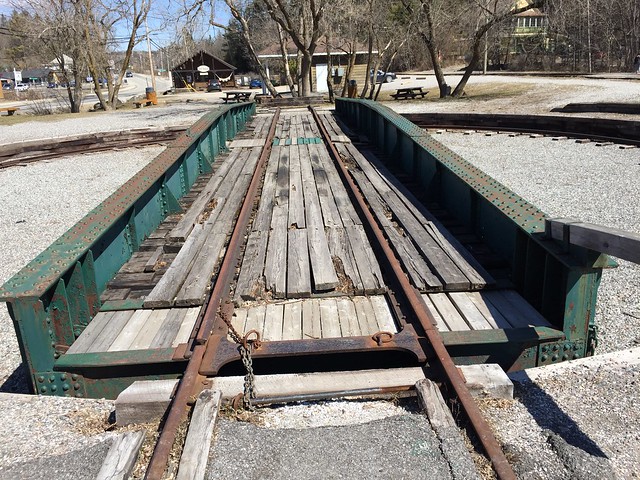 Finally, I painted the rails throughout the module. I was thankful for the base colour of Krylon Camouflage Brown throughout, as otherwise painting the rail would have been even more tedious. With Poly Scale Roof Brown, I touched up all the parts that had been left unpainted to facilitate soldering, as well as any chips made when spiking. Lastly, I flowed a wash of Poly Scale Rust into the web of the rail throughout.

2 thoughts on “Finishing up the turntable tracks”