This week marked a return to modelling – something I feel I’ve been lacking for the past few years as I’ve been renovating the basement and building a layout in it. There was that little bit back in the spring when I had to build the cosmetic girders for the turntable, and now, this week, I got to detail the walkways.

For inspiration, I started with a photo from Niall MacKay’s book, Over the Hills to Georgian Bay. It’s a photo I’ve always liked, even though it turns out it isn’t even of a Canada Atlantic turntable. A couple of neat details appear in this photo. First there are two posts at the middle of the turntable, which I suspect the engineer used to find the middle and balance the engine. Second, one of the timbers at the edge of the turntable has lifted up. I resolved to model these details.

So, pre-stained stripwood in hand, I merrily started cutting and gluing. A few nut-bolt-washer castings and simulated nails, and I thought it looked pretty good. There is a minor issue in that the rail is not perfectly centered on the ties, and so, there is a larger gap between the walkways on one side than on the other. If it really bothers me, I may go back and fix it later.

I decided to make those posts so they would break away if someone accidentally knocked them. The foot of each post fits into a tiny mortise in the timber beneath. The stays are actually E-Z Line elastic. So, the posts snap into the mortise, and are held there with the elastic. Here they are getting glued up, with masking tape adding tension to the elastic while the CA sets. 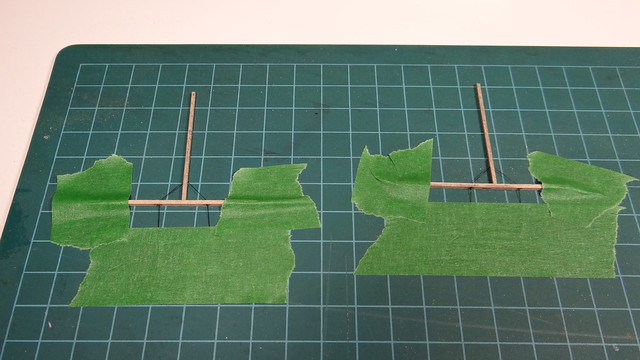 I didn’t decide to go checking on clearances until just after I’d placed the initial push bars. Doh! They were originally on the walkway proper, and didn’t clear the cylinders. 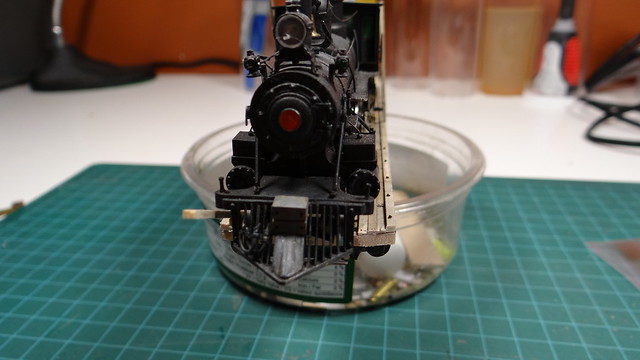 Fortunately, the push bars hadn’t set yet, and so, they were easy to remove and replace, further out and at an angle (see below). More difficult are the posts, which actually interfere with the cab steps. I’m going to have to come back to that. Perhaps there needs to be a little styrene socket to hold them out from the sides of the turntable. There is definitely something going on there with the prototype, but it’s hard to see in the photo. 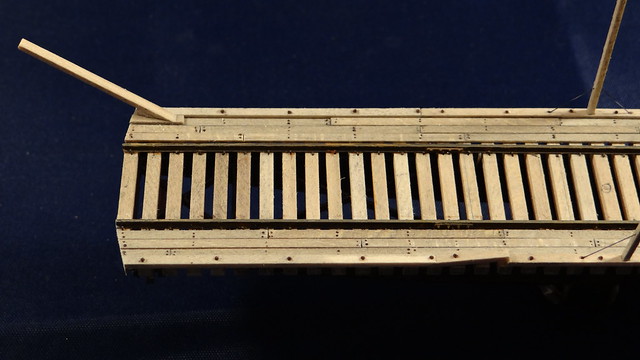 2 thoughts on “Shoulda measured the turntable before adding details!”