Brian Pate is a master model railroader. Surprisingly he doesn’t have the designation from the NMRA, but nobody who knows him would argue that he is otherwise. I believe he is perhaps the only person to have won the gold award at two national NMRA conventions.

So, when we learned that he and his wife had decided it was time to leave their home in the nose-bleed section of North Vancouver, we started to cast about for a new location for his fabulous model railways – the Klondike Mines Railway and Revelstoke on the CPR. Two teams formed – one to remove the Arrowhead branch, which is the only part of the CPR finished, and another to extract the KMR as far south as 90 Below Discovery. Arrowhead will reappear at the Revelstoke Railway Museum, while the KMR is destined for Dawson City.

There are an amazing number of people in this hobby who are able to get to a work session on a weekday afternoon. I’m not one of them, and so, I’ve been contributing by popping in alone to remove and wrap buildings. This has given me an unusual opportunity to look around in a way I never have before.

I’ve known for a long time that Brian builds plugs in his scenery to hold the place for buildings that he needs to build. He creates a little dam of stripwood around a base of .040″ styrene, and then builds scenery up to this dam. This reserves a flat level spot to interface with the building, and the plug gets incorporated into the finished model, ensuring that it fits perfectly. 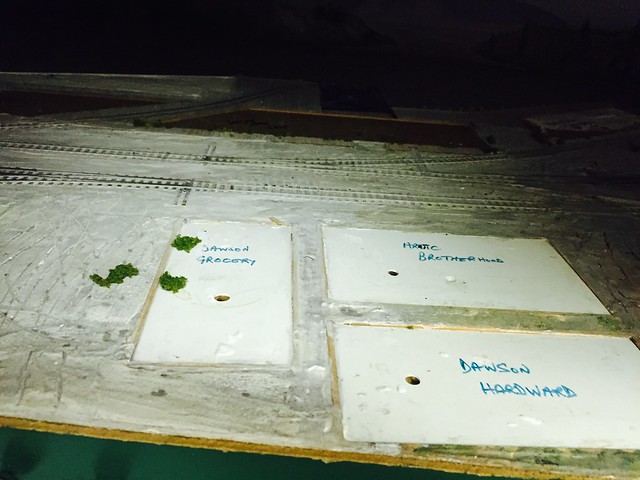 Until I started prying buildings off the layout, though, I didn’t know how the plug got used. I was surprised to find that the walls overhang the styrene base. I expected the plug to form the bottom of the foundation, thereby planting the building in the ground. I’ve never noticed any gaps under Brian’s buildings, though, and some of them were difficult to pry up! 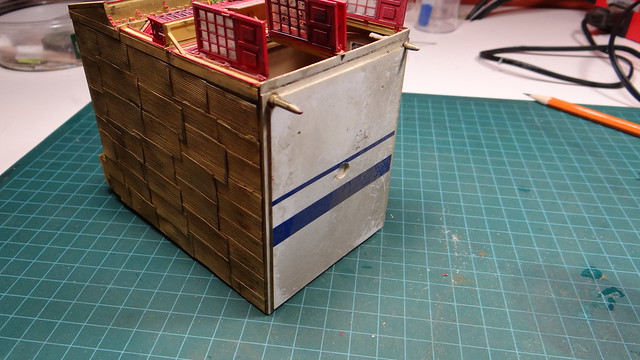 Sometimes Brian seems to have changed his mind about the exact location of a building. He still uses the plug, though, to fix the building to the layout. Notice the two pins in the corners of the building. These also hold the building in place, as well as feeding power into the building for lighting.

Speaking of lighting, Brian is somewhat famous for lighted, working switch stands. His mechanism for making them work puts my Rube Goldberg contraptions to shame. To drive turnouts and route the polarity, Brian uses slide switches at the end of metal rods. A piece of rail hinges off the rod somewhere back from the switch. This rail is hooked on the end of the switch target. The magnet wire poking out of the ends of the target tubes drives the LEDs in the lamps. Between the KMR and the CPR, Brian must have had over a hundred turnouts, and this simple but effective contraption is included on more than half of them. 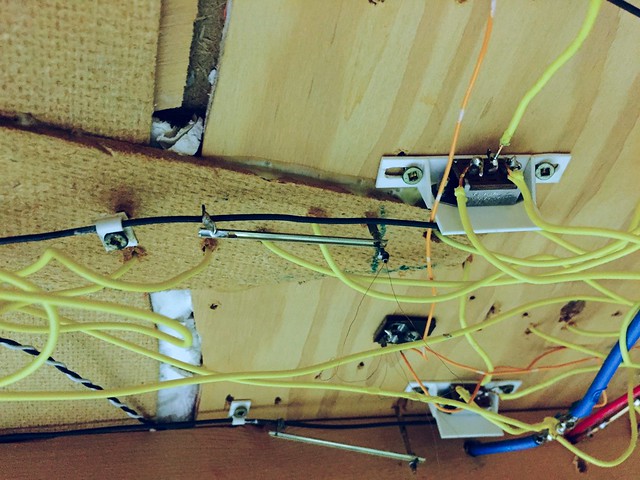 The simple turnout and switch stand control shines a spotlight on a hallmark of mastery: knowing what you can get away with. Again, as I’ve been wrapping models, I’ve had the opportunity to examine them much more closely than when they were on the layout. In particular, the very first building I picked up, the Dawson City Volunteer Fire Department, immediately popped its front off and dropped it onto the cement floor. So, I became very acquainted with this little gem as I put it back together.

It’s a lovely model, and yet there are parts that don’t fit the way I would expect from Brian. At the time he built it, Brian was throwing together buildings at an alarming rate, knowing that he had a layout to build. So, I suspect he was taking liberties with the buildings that are not in the front row. The parts that admit gaps are always in shade, and were probably never seen clearly. Brian knew what he could get away with and used that knowledge to his advantage.

It’s been an honour to work on this project. Thank-you Brian for all the joy you have provided to so many, including me, through your operating sessions over the years.