I arrived home this evening to find the Boy had taken a stab at working up the roundhouse door mechanism in Lego. Like all the people on my team at work, he had very high-level instructions, and as with them, he exceeded my expectations. I’m sure there are more bevel gears in his collection, and I may ask him to see if he can make the mechanism a little more compact. But, hey, it works pretty darn well! 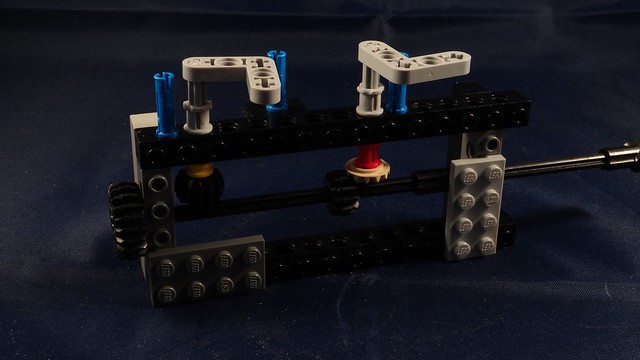 He had it on a big black plate, which I removed, and we tried several different arms to hold the magnets. The one shown works best, and a magnet above and below holds them on, at least temporarily. They are L-shaped here because we had some L-shaped pieces in the bin.

A fun aspect of the magnets is that the magnets for the two doors attract one another. So, when you close the two doors, they shut firmly. Another fun aspect is that when you open one door, the other will move a little. That’s exactly how big doors behave, in my experience.

This progress inspired me to have a go at actually opening the doors on the foamcore mockup roundhouse. Unfortunately, I only have two sizes of magnets – tiny (about 4mm x 2mm) and stonking (about 14mm x 20mm). I started with the tiny magnets and a length of steel wire driven horizontally into the bottom of the door. The wire would be super-easy to hide in an otherwise wooden door. No dice: these do not have enough juice to pull open the door even from about a millimetre away.

Then I got out the stonking magnet. I only have one, which was liberated from a human-powered flashlight I received one Christmas. With the wire, there was just enough oomph to move the door, but not to open it, from a millimetre away. Sure, they’re a bit stiff, but that magnet is really powerful (or so I thought).

I reasoned that perhaps the wire was to blame. So, I tried replacing the whole back of the door with a piece of steel. Now we’re cooking! The stonking magnet can open and close the door easily, even from beneath the layout. So that is the secret: lots of steel and a very strong magnet.

Steel doors offer a special challenge: how to make them look like unpainted wood? I’ve seen some people who are very adept at making plastic and brass look like wood, but so far, I’ve not got the knack.