I’m always amazed at how slowly I make things out of brass.  Tonight, for example, it took me an hour to cut two rectangles, solder them together and drill six holes through them (one not in quite the right place!).  Then I spent a further hour scoring and bending them (again, one score is on the wrong side!), and filleting up the bends with some solder.

Two hours for two pieces of brass with twelve holes and six bends.  Even so, I find working with the metal satisfying, perhaps because it kind of looks like gold when you shine it up.

In the end, I have this gearbox for the turntable, mostly ready to go.  It’s relatively light-weight construction.  However, the speeds and torque will be very low, and so, it should be sufficient. 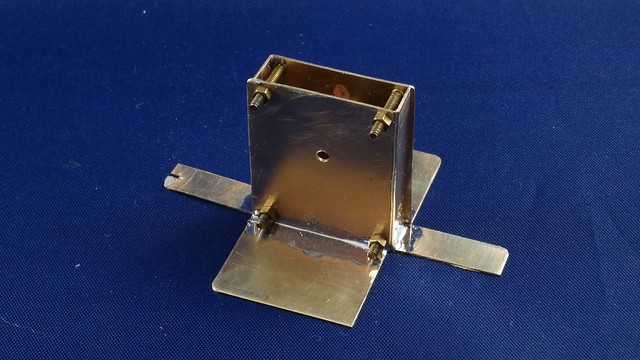 It seems I’m not really getting a ton of value out of the purchase from Tamiya. Once I opened it up, I realized the gearbox itself could only really be used with the included motor; I set that aside.  I knew before I opened I don’t want a 1:126 ratio for turning the turntable: most of the gears are surplus too.  In the end, all I get out of the kit is a worm and worm gear.