Honest, I’m not procrastinating, really!  Sometimes I do that when I’m not sure I can pull something off, but that’s not the case this time.  I’m actually travelling, so it’s hard to make progress on the layout.  I did spend some time thinking about how to line up the two ends of the turntable precisely.

Being Proto:87, this alignment is going to have to be very precise if equipment is going to transition across the gap.  If I could guarantee that the rails were perfectly centered on the turntable, I would be less concerned, but I don’t think there’s any way to guarantee that.  So, I came up with the following plan for getting the two ends offset by the same amount, even if not perfectly centered. 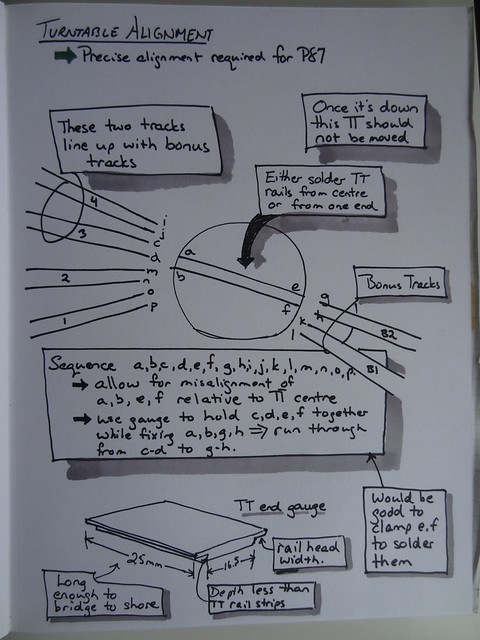 In essence, the plan is to get one end centered as best I can, and use that to set one of the incoming staging tracks. Then, turn the turntable around and fix the other end of the turntable tracks so they line up with the staging tracks. Finally, by holding the turntable steady with a specially-made gauge, I should be able to locate the bonus tracks and the indexing tubes (that last bit isn’t on the paper).

I’ll be back in Vancouver in Wednesday, but may not have time to try out the theory due to the season.