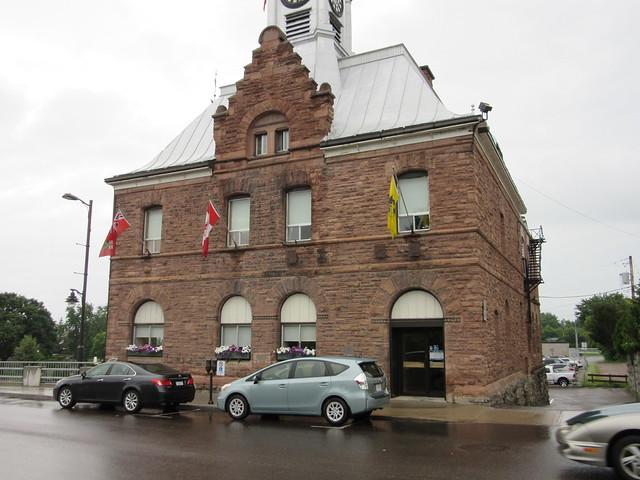 I suppose, given the recent conversation, I should come clean and explain why I am modelling Pembroke.

My interest in the Canada Atlantic Railway started in my late teens. I was certainly influenced by Niall MacKay’s excellent book, “Over the Hills to Georgian Bay.” But, if I am honest, I was thinking at the time about modelling the current railroad scene. Even today, there is something that stirs me about a lashup of striped CN diesels; it all went downhill when they dropped the stripes.

This was in the late eighties, and Jack Burgess was a frequent contributor to the modelling press. I really admire Jack’s modelling, but the one thing that stood out for me is that Jack’s name was kind of synonymous with the Yosemite Valley Railway. Wouldn’t it be cool to have your own railroad!

Now, being Canadian, there were only a few modern railroads to consider: nobody could consider CN or CP their own as there are hundreds of people around the world modelling them. There was BC Rail, which was so far away it may as well have been on another planet. I looked for a time at the Algoma Central, but failed to find it interesting (it has a great story, so I don’t know why). Many of the other regional railroads were too remote or difficult to research in these days before the world wide web. However, if you cast your net back in time, there are hundreds of railroads in Canada, and most of them are not modelled at all!

So, I looked around and found the Canada Atlantic. This line not only ran nearby to where I grew up, but also ran through some favourite Ottawa Valley towns, like Renfrew, Barry’s Bay and into Algonquin Park. I confess that at the time I thought the dearth of information would be kind of liberating, allowing me to freelance what I liked. So little was known, that there was nobody who would call me a liar!

I began to research the line, and have since sunk many hours into that pursuit, to the point that it would be difficult to abandon it. What emerged was a fascinating story of industrial empire at the coming of age of our country. I also came to appreciate the benefits of modelling an earlier era, despite the challenges (more on that another time).

Having said that, I don’t feel compelled to tell the story of the CAR in the same way that I think others do, or indeed the way Jack Burgess seems to be. I think what motivates me to model the Canada Atlantic is that I am the only one (as far as I know, please shout if you are also!) really doing it.

Well, okay, that answers part of the question, but why Pembroke, itself?

The CAR was a big railroad, and during the grain rush, there was a train every fifteen minutes. I knew early on that it would take me time to amass a fleet to support such a scene, and so, a branch line is much more feasible. There were four branches – Parry Sound, Pembroke, Hawkesbury and Rockland. Pembroke was closest to my parents’ home, and the easiest to research.

Since then, it’s been a little like the relationship between Tevye and Golde in Fiddler on the Roof: I may not have started modelling Pembroke out of love, but after all these years, there is much to inspire me in this little town. I love stone and brick buildings, and Pembroke allows me to model the stone post office and the bridge, as well as several brick buildings along Pembroke Street. Then there are the big billboard signs, the dam (interesting story there) and a most unusual factory. Operationally, the interaction of the direct Ottawa train and the mixed trains also make Pembroke interesting.

As Simon pointed out, the answer to “Why Pembroke?” may really be “Why Not?” Perhaps if more modellers just picked a road, a place and a time and really observed them, and really stuck to them, they would find, like Tevye and Golde that the seemingly banal offers much to love and inspire.

4 thoughts on “Why Pembroke?”