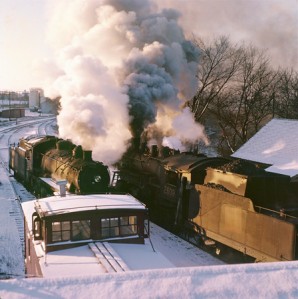 I would have to go through my notes to see just when I met Del Rosamond.  It was in ’96 or ’97, I think.  I called him up out of the blue from the Champlain Trail Museum, where I had been doing research, and they had given me his name.  “Sure, come on over,” he cheered, and for the next few hours, I poured over his collection of news clippings and books.  We drove around town and he pointed out surviving features of the Pembroke Southern.  Later, we stopped to make some photocopies, and I scribbled more notes on these.  He was a wealth of knowledge and a true gentleman.  Sadly, he died while I was in England, a few years later.

By the time I met him, Del had already donated his photo collection to some organization, but unfortunately, he couldn’t remember which one.  So, I am delighted to learn that some of his collection has made its way into P.W.Newman’s hands, and that Mr. Newman has had the ability to clean and scan the images.  They are a beautiful collection of colour slides showing the end of steam in Ontario.

There are a number of shots of Pembroke that are new to me, including the one above that shows the two moguls and the flanger on the roundhouse lead; one of the diesel photos shows the roundhouse after the fire. The collection is breathtakingly clear, and is a fabulous study of Canadian steam and early diesel in the fifties.    You should take a few minutes and check it out.

Thank-you P.W.Newman for looking after Del’s slides and posting them!