I decided to take a break from the trackwork this evening. The Bullfrog is going to be a two-person job, and so, I’m going to ask Andrew to help me on Wednesday. The guard rails can go on either on Monday or Tuesday evening.

In the meantime, I have some visitors coming to use the guest room in September, and it would be nice to have the fascia finished before they get here so the layout doesn’t look like a construction zone so much. The critical path for that part of the project includes the design for the turnout controls (it has to do with the location of the triangular piece of benchwork – too complicated to explain why I need to do this now).

So, tonight, I dusted off Sketchup and converted the Lego design into something that could be realized in plastic and steel. There is a little more refinement to go, but here it is for now. 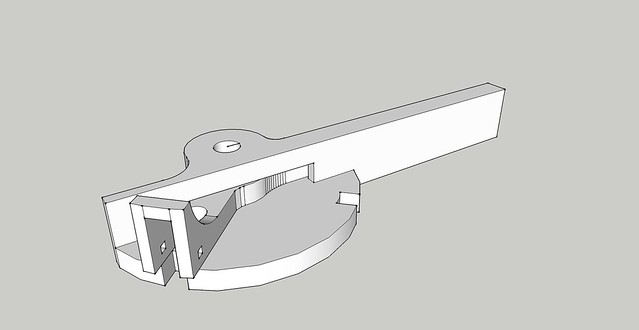 The large flat face is meant to be flush with the fascia. I’ve not yet designed the handle, but it appears I may have to make them from steel or brass anyway as I don’t believe plastic will be a good choice given the location of the pivot.

A friend recently bought a FDM 3D printer. So, I may get him to print a test copy before going to Shapeways for their SWF sintered nylon. A rapid prototype of a rapid prototype?

3 thoughts on “Design for turnout control”