Most of my railroad time this week was spent on painting the clouds. Like everything else, I got better at this as I went along, and so, I kind of did it about one and a half times.

I roughed the clouds in on Sunday with some plain white paint, and they looked pretty flat and lifeless. So, through the week, I added shadows to them. For the most part, the shadows are the same flat white house paint mixed with some Payne’s Grey, straight from the tube; in a few cases, I mixed in some Raw Umber.

By the time I was done, some of the clouds looked pretty heavy. I always find working with light colours in acrylic especially challenging. My wife didn’t like all the brush strokes, so she suggested I try using a blending sponge, and threw one downstairs to me. This worked a treat for lightening up the clouds, but now they may be too light. Certainly the camera seems to think they are pretty light.

Here’s a before and after shot of one of the clouds, judge for yourself: 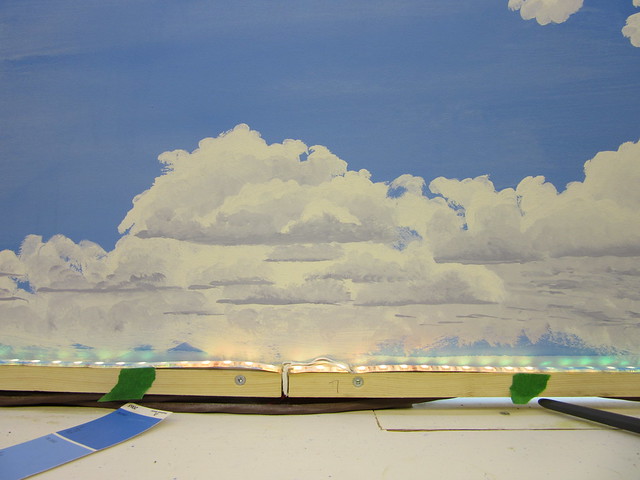 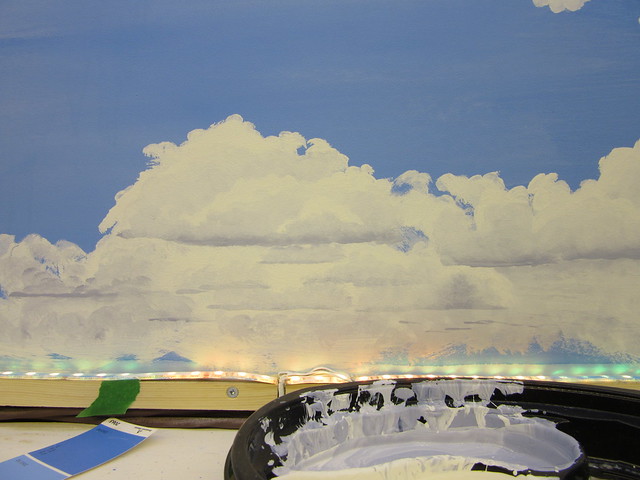 And here is the whole sky as it was after lightening some of the clouds.

Am I done? I think so. Tomorrow, I have a bunch of friends coming to help install the layout, after which, continuing to fuss with the clouds is going to require standing on a ladder and leaning across the layout. So, hopefully, it looks good to me when I go down and look at it after a night’s rest.