Andrew and I got together the other day and finished up the switch stands for the north section. This resulted in yet more refinements to the design, as well as some creative problem-solving.

The first refinement was Andrew’s suggestion to not tap the hole in the throw rod extension, but rather to use two nuts, visible on the image below of the south switch of the freight shed runaround. I had been tapping the hole so that the adjacent nut would lock the extension and keep it from rotating. However, allowing the extension to slide along the threaded rod makes the adjustment virtually trivial in comparisons to the contortions I had to go through before. 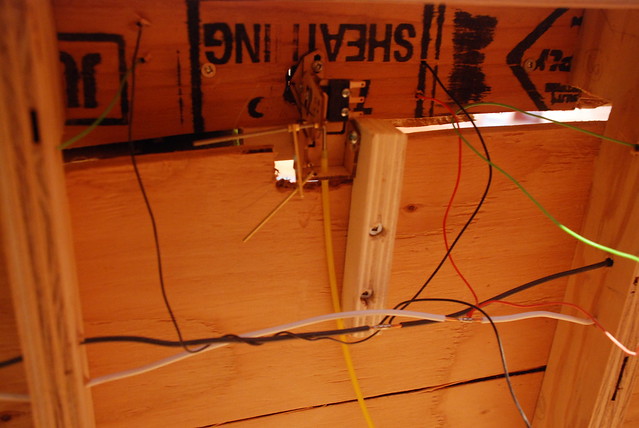 This installation also demonstrated that some of these switch stands want to bob up and down. If the Bullfrog is not exactly vertical, the switch stand target will bob more up than down, and so, it’s important to assemble and install the Bullfrogs accurately.

The next switch along is right at the rear edge of the layout. Now, the layout is not going to be exactly up against the wall, and so, we have a little space where the lever for the switch stand can swing. We cut a big hole in the stringer to allow this swing. For some reason, this target really wants to bob up and down. It returns to the same height at both ends of the travel, but it moves about 1.5 mm. Andrew fashioned a collar to ride at the top of the stand. It now accommodates the radial motion of the bottom of the Bullfrog by flexing the switch stand lever. No more bobbing. 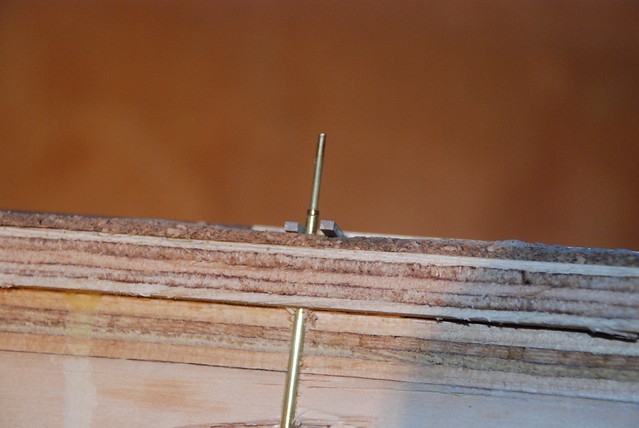 The last two switches on the line, for the north end of the freight shed runaround and the yard stub track, were too close together to allow for the version 1 mechanism. So, this time, rather than pulling directly on the Bullfrog, the push rod pulls on the extension arm, which in turn connects to the Bullfrog. To do this, I bent over the end of the extension and passed a 2-56 screw through a hole in it. This screw engages with the push rod. Andrew thinks this is a better design anyway, and he may be right. 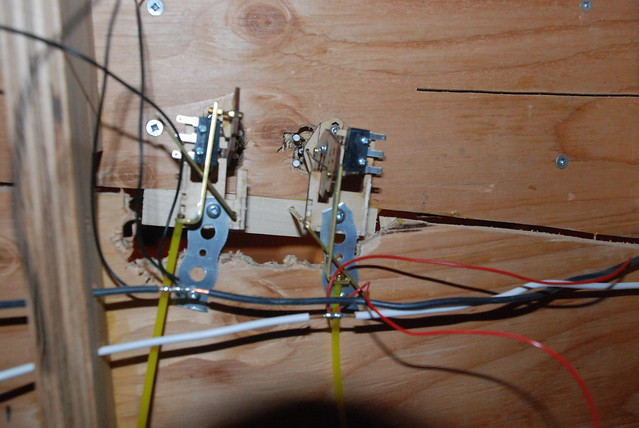 We still have one more Bullfrog to install, but that will not be until the turnout at the north end of the siding has been built, after installation. The last one will be installed upside down over a table – a very awkward spot. So, I’m delighted we’ve come so far with this design. While the first one took an evening, these last five were all completed in one evening, and we were getting faster.